The second of two tutorials explaining how to set up a video booth in DSLR Remote Pro, and enhance the videos captured by the app.

DSLR Remote Pro can be used to run a video booth as well as capturing still photos. The original video is often post processed to add effects, branding and presentation. Videos use large quantities of data, which can be slow to transfer and process, so post processing is also used to crop and reduce the video to a more practical size for sharing by email or text.

The first tutorial Video Booth Basics  was an introduction to running a video booth powered by DSLR Remote Pro, running through 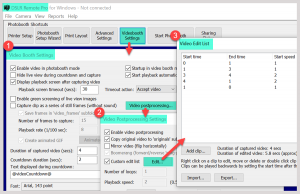 Simpler controls for post processing can be found in (2). To build combinations of effects use the video edit list (3)

(2) Video Postprocessing Settings is used to set the simpler post processing instructions, including audio capture, cropping, resizing, playback speed, reversing direction (boomerangs) and the number of loops.  Enable video processing must be checked for any processing to take place.

(3) Video edit list is where you set combinations of effects including speed ramps and jump cuts. This is the place to switch from slomo to fast forward, while playing the clip forwards or backwards. Check Custom edit list on the Video Postprocessing Settings window to reach this screen.

When Custom edit list is checked loop, boomerang and playback settings in the Video post processing settings window are greyed out. 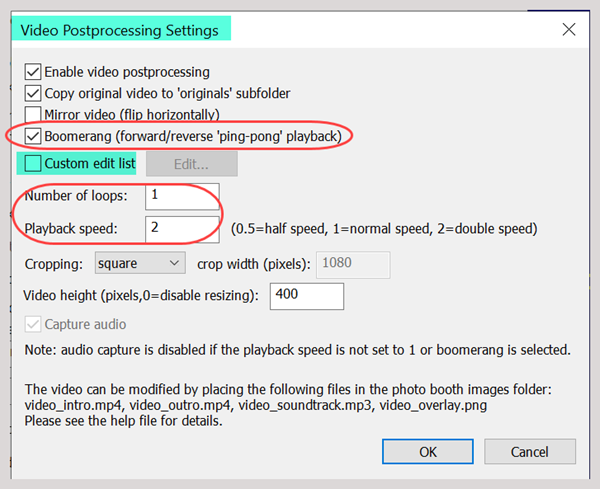 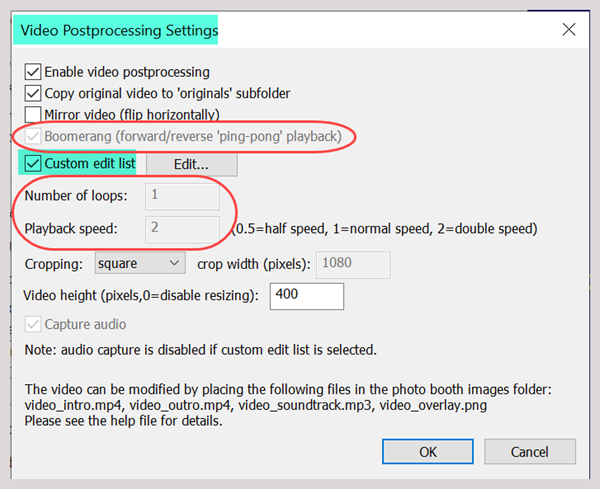 When Boomerang is checked the video will be played back forwards then in reverse.

If the video loops more than once, the boomeranged video will replayed.

Loop the video if you want it to play more than once.

Playback speed 1 usually plays the video back at it’s original speed (except when shooting at 120 fps – see below).

For high quality slow motion, use a camera shooting 120fps and see the Slow motion instructions below.

Cropping videos to square and other aspect ratios

Cropping is used to change the aspect ratio (shape) of the final video, and is applied before any resizing. 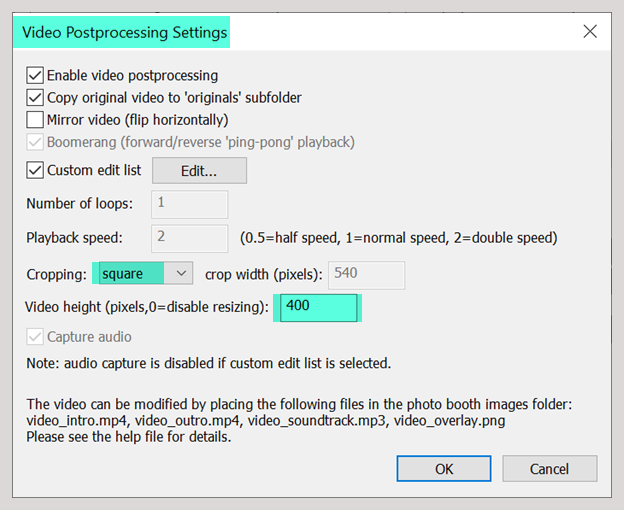 To produce videos with aspect ratio 3:4, set Cropping to  custom and crop width (pixels) to 3/4 times the original video height.

To reduce the size of your video, reduce its height in pixels. When the video height is reduced, the aspect ratio is unchanged. 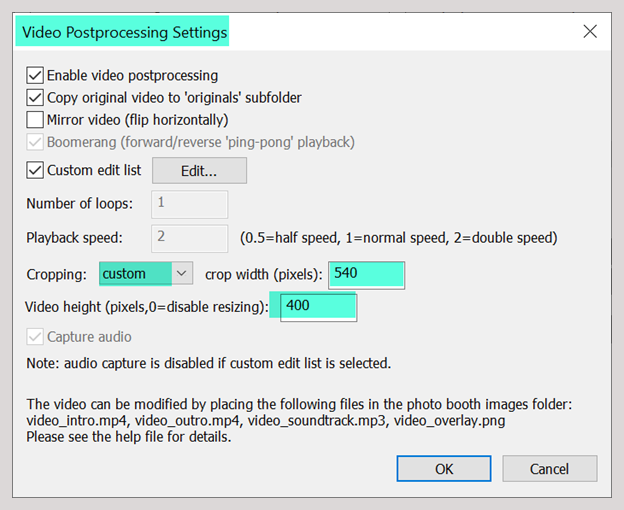 Size and aspect ratio of the final video (cropping and resizing) needs to be resolved before adding overlay and intro/outro videos.

To add a static overlay to the video, place an image called video_overlay.png in the PhotoboothImages folder.

We suggest that the overlay is the same size in pixels as the video you play back ie after any cropping and resizing.

Intro and outro videos must be the same size (in pixels) as the processed video. If they are different sizes they will be discarded

To add an intro video place an image called video_intro.mp4 in the PhotoboothImages folder.

To add an outro video place an image called video_outro.mp4 in the PhotoboothImages folder.

You can capture sound with your video, or add your own soundtrack. Choose from three options

You can add an MP3 soundtrack by calling your soundtrack video_soundtrack.mp3  and placing it in the photo booth images folder. The soundtrack plays from the beginning of any intro video, and must be at least as long as the final video including any intro and outro.

Using a soundtrack with intro and outro videos

The sound track replaces any sound in the captured video, intro and outro videos.

Audio from intro and outro videos

Audio from intro and outro videos is only used when both the captured video has audio, and is played back at normal speed.

Check the Audio capture box in the Video post processing Settings window to record sound with the original video.

Audio capture is disabled if you select Custom edit list, Boomerang, change the Number of loops or Playback speed.

This is where you cut the video into clips and reassemble them, applying different effects in different clips.

Individual clips can be added, edited, moved around and deleted. You can also save and reuse effects you or others have already built. 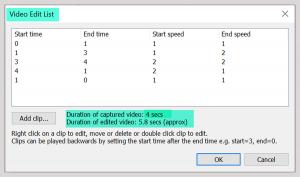 Sample Video Edit List – Boomerang effect with speed ramping up during forward segment and back down during reverse (Breeze DSLR Remote Pro 3.17)

Create glitches by repeating short sections of the original video

To create a boomerang effect, play the video forwards and then backwards.

You don’t need to assemble a set of clips for every event. Import and export your edit lists to reuse complex effects. 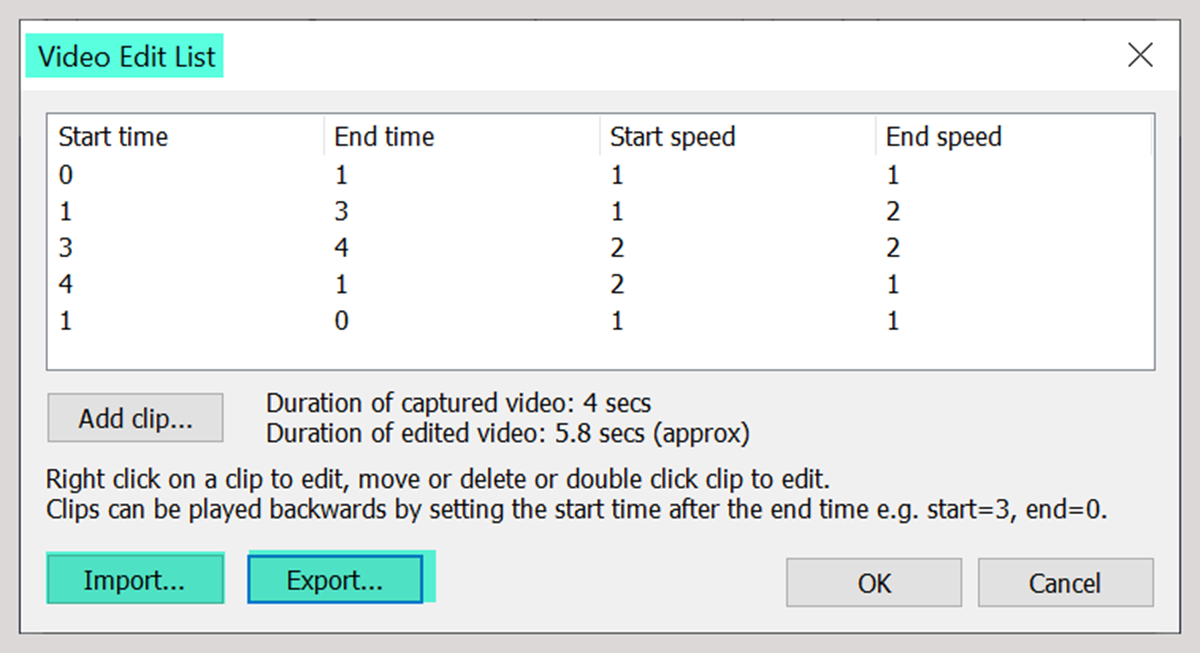 For best slow motion results use a camera with 120 frames per second (fps) capability*.

Some Canon cameras have a special slow motion setting capturing video at 120 frames per second (fps), and automatically replay at 1/4 of this speed ie 30fps. This gives excellent quality slow motion playback, with playback speed set to 1.

Because 120fps videos are automatically replayed at 1/4 speed, a 3 second video shot at 120fps will have a duration of 4*3 ie 12 seconds, and sound is not captured.

Be aware of the changed duration when using the Video edit list.

In the example below video duration was set to 4 seconds in the Video Booth Settings screen.

The movie was taken using 120fps.

Because 120fps was used, the video downloaded to the computer is 4 *4 seconds long ie 16 seconds long.

This can cause confusion using the Video Edit List screen. 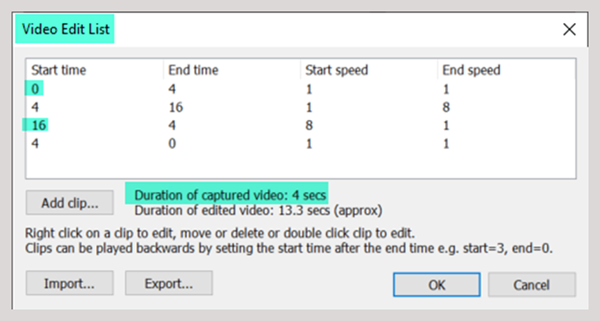 DSLR Remote Pro may show warnings when you save individual clips and the complete list. In this case the warning can be ignored and the settings accepted. 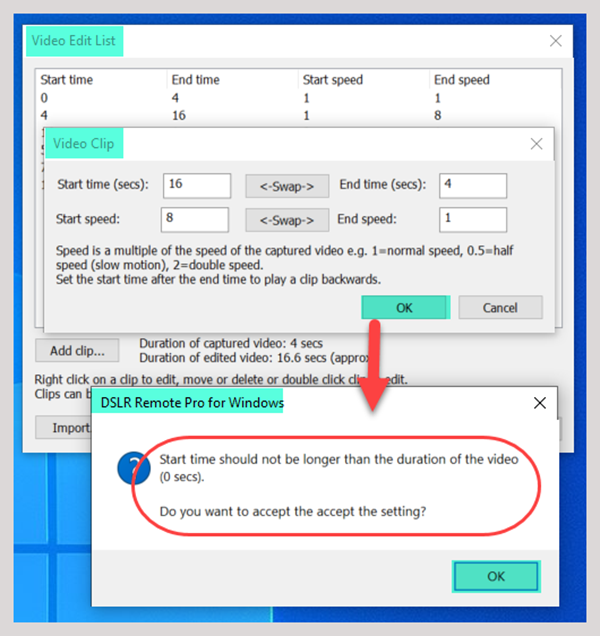 Start time should not be longer than the duration of the video warning (Breeze DSLR Remote Pro 3.17.1) 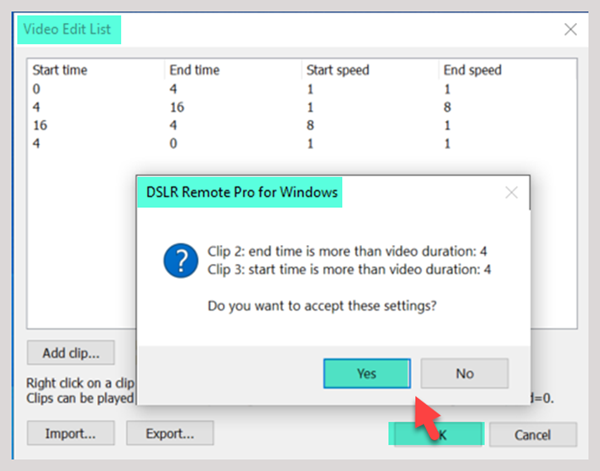 Shooting slow motion with other cameras

You can create slow motion video with other cameras, but the quality will not be as good. Canon camera models which don’t support 120fps can capture video at up to 60fps.  You can play this back slowly (e.g. 1/4 normal speed by setting the video playback rate to .25), but this won’t give as good quality as (for example) a Canon EOS M50 capturing at 120fps

Videos use large quantities of data, which can be slow to transfer and process. Photo booths are designed to be fun and have a fast turnaround. You need to balance fast results with high video quality.

Minimise both download and processing time to produce and playback the finished videos quickly.

Download time is covered in the Video Booth Basics, and is affected by the length of clip captured (duration), frame rate and image quality. Wired download via a USB cable is generally faster than wireless download.

This tutorials looks at processing time in more detail.

We recommend a fast, recent computer with a quad core, i5 or i7 processor and SSD to process videos quickly. The main factors are the speed of the processor, number of cores and the computer’s storage. Increasing the amount of RAM above 4 or 8GB will have little or no effect on the processing speed. More..

Video duration, frame rate and image quality also affect the processing time – reducing each of these speeds up processing the video as well as the time it takes to download from the camera.

Reducing the size of the video by cropping and reducing its height generally also decreases the processing time.

Video edits: Videos with many edit steps are likely to take longer to process than simpler versions.

When videos are cropped, you also need to mask the live view (if shown) to match, so that what guests see on screen is included in your final videos.

This is done by adding a video_live_view_overlay.png to the PhotoboothImages folder. More

Saving both the original and final versions of your video

To save both the original and final versions of guest’s videos, check Copy original video to ‘originals’ folder in the Video Postprocessing Settings window.

Some of the screens used for video booths have different names to those used when shooting still photos.

More about screens displayed to guests.

Errors or warnings generated during the postprocessing are automatically logged to a file named DSLRRemotePro.log in your Documents folder.

You can find a fuller  description of video shooting in DSLR Remote Pro in the online manual.